Can I Sue a Nursing Home for Negligence if I Signed an Arbitration Agreement? 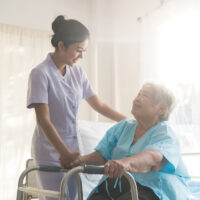 It has become common practice for nursing home contracts (as well as contracts for many other consumer services) to include a provision requiring the resident and their family to handle any future dispute with arbitration rather than via lawsuit. These arbitration clauses require an individual to waive their right to file a lawsuit for damages against the nursing home based on claims such as breach of contract. While arbitration can be a cheaper and more streamlined alternative to traditional lawsuits, the process is best reserved for two equal-power parties and can be disadvantageous when, for example, an individual is arbitrating against a big business. More recently, nursing homes have been making those arbitration clauses optional, allowing residents to be admitted even if they do not consent to arbitration.

The plaintiff in the case titled Ricciardi v. Abingdon Care & Rehab Center was fifty-three years old when he transferred to the defendant skilled nursing facility. He had previously been diagnosed with multiple sclerosis (MS) and bipolar disorder. He alleged that negligence of the facility and its staff caused him to develop multiple advanced stage pressure ulcers, resulting in “great pain, suffering, disability, loss of quality of life and medical expense.” The facility filed a motion to dismiss the complaint based on the fact that, upon his admission, the plaintiff had signed an arbitration agreement in which he waived his right to sue the facility and agreed to arbitrate any future legal disputes.

The court held that arbitration agreements “must be the product of mutual assent,” and here, there was no mutual assent. The plaintiff was given no time to review the agreement, it was not explained to him, and he was not given a copy afterwards to review or to discuss with friends, family, or legal counsel. Waiving your legal rights is a serious matter and should not be taken lightly. As a result, the court allowed the nursing home negligence lawsuit to proceed.

If you or someone you love has been subject to abuse or negligent care in a New Jersey nursing home, contact the passionate and effective Hamilton nursing home negligence attorneys at Lance Brown & Associates at 609-587-5100.