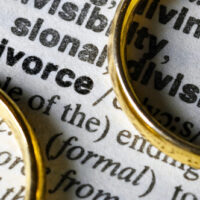 A Temporary Restraining Order (TRO) issued due to an allegation of domestic violence can have several immediate negative effects on the person subject to the order, including being ordered to move out of the house, prohibited from having contact with his or her children, and prohibited from possessing a firearm. In addition, if you are in the midst of or become involved in divorce proceedings, the consequences can be even more severe. Having a New Jersey restraining order issued against you can seriously impact the outcome of the divorce, with adverse effects being felt for years into the future.

In a divorce, the main issues to be decided by the court are the division of marital property, deciding who gets custody of the children, and the payment of child support and spousal support. A restraining order in New Jersey can negatively affect the outcome for the subject of the order in all of these areas.

If a TRO has been issued against you, you will have the opportunity to appear in court and challenge the order before it is converted to a final order. Having the advice and representation of an experienced New Jersey restraining order attorney can be crucial to keeping a temporary restraining order from becoming permanent and having serious, long-term effects on your life.